NOTE: It was previously thought that this family was called Myszkowski, but this now seems to be incorrect.

Nancy Pshedetsky (née Necha Nicinski or Nicinska) on her identity book issued between 1916 and 1918 confusingly lists her mother's maiden name as Pearal Mishkoskie [sic].  Perla Karp (her real name) married Luzer Nicinski (also known as Louis or Lewis Cohen) in Klodawa. Her father was Mosiek or Mojse Karp, and the Mishkoskie surname implied in Nancy's Identity Book may be derived as a patronymic from his given name rather than the implied Myszkowski surname.

Although Nancy moved to London where she married Michael Pshedetsky in 1909, her parents remained in Poland.
She visited them in 1929 (with unborn daughter - soon to be that last of ten children), leaving her family - husband, four daughters and five sons in the charge of the oldest daughter.

A record of Nancy's mother's name (though incorrectly spelled) appears in Nancy's identity book (see below).

Pages 4 & 5 of Nancy Pshedetsky's Identity book - the only known record of her mother's name.
Name of father - Louis Cohen (spelled Lewis on her marriage certificate, his name was listed on his son's 2nd marriage certificate as Lazarus Nicinski).
Name of mother - Pearal Mishkoskie 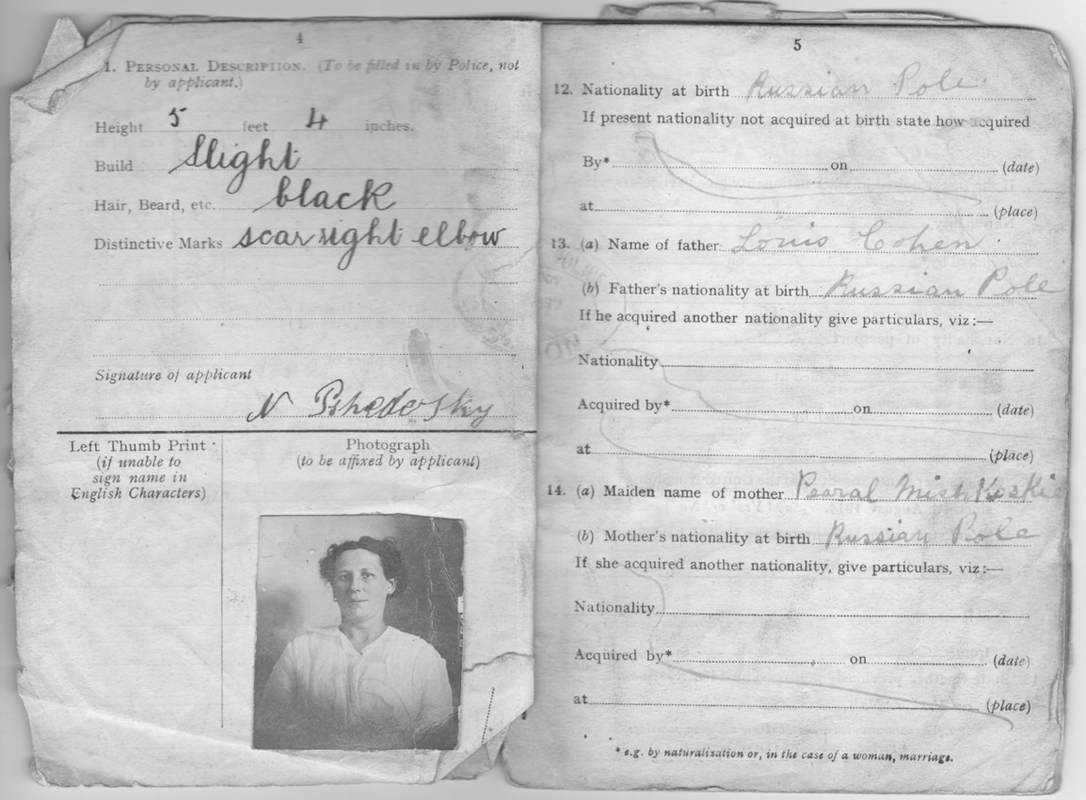 Interestingly, this same identity book seems still to have been needed as late as 1960 (the year of the latest official stamp).
It was needed as neither Nancy nor her husband Michael Pshedetsky ever took British citizenship, and were officially stateless.